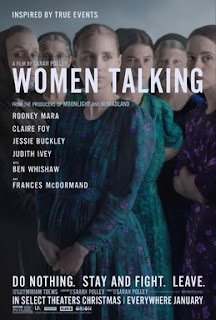 Women Talking--In a hardcore religious farming colony, a group of men have been arrested for repeatedly tranquilizing and sexually violating women of all ages, including young children. The attacks have been attributed to ghosts or the Devil, or to "wild female imagination." With the farm to themselves for a couple of days before the men make bail, the minimally educated women sit around the barn and debate whether to forgive the men and carry on as before, to "stay and fight," or to leave the only home they've ever known. They've been told that if they leave, they will forfeit their place in the Kingdom of Heaven.

Written and directed by Sarah Polley from the novel by Miriam Toews--inspired by a real-life 2011 case at a Mennonite community of Canadian origin in Bolivia--this drama opens by calling itself, in subtitle, an act of female imagination. It certainly feels convincing. Superb actresses of all ages, ranging from Judith Ivey, Sheila McCarthy and a particularly forbidding Frances McDormand among the elders to Rooney Mara, Jessie Buckley and Claire Foy among the younger adults to some fine, lively women among the youth, embody the various responses, from seething, vengeful fury to sad acceptance.

Though the tone is inevitably somber, Polley's direction is deft, and she leavens the gloom with some high-spirited moments. Looking in from outside their world, many of us in the audience are likely to feel the most sympathy with the viewpoint of the enraged women who favor a violent response; the idea of a mass exodus from the scene of these atrocities sounds like a solid idea too. Forgiveness and a return to the status quo feels, in this instance, like a very distant third.

The movie also includes a token adult male, a gentle schoolteacher (Ben Wishaw, excellent as usual) not implicated in the attacks, who is allowed to take the minutes of their discussions because he can write. He's been to university outside the colony, and when a census-taker drives by in a car, blaring "Daydream Believer" by the Monkees, he softly sings along. The moment makes a pretty strong case for secular pop culture. 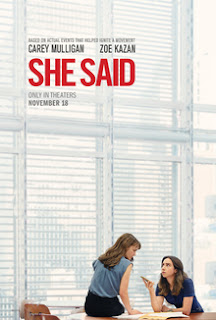 She Said--This chronicle of the struggle of New York Times reporters Jodi Kantor and Megan Twohey to break the Harvey Weinstein case could be seen as a sort of companion piece to Women Talking (Brad Pitt was among the Executive Producers on both). At one point in the investigation Kantor (Zoe Kazan) and Twohey (Carey Mulligan) wonder if anyone will care about the story if it runs. People did--the story, which ran in October of 2017, was not only one of the factors that led to Weinstein's arrest and conviction, it also helped get the #MeToo movement rolling.

The initial response to the movie, directed by Maria Schrader from a script by Rebecca Lenkiewicz (based on Kantor and Twohey's book), was less explosive, however; it bombed in the multiplexes in November. It's worth a watch, though. While it lacks the precision and tension of the greatest of investigative-journalist buddy pictures, All the President's Men, it's still an absorbing account, focusing on the extreme reluctance of the targets of Weinstein's savagery to be first to go on the record by name.

Schrader's direction generates a palpable atmosphere of the gloomy anxiety that life in the 45 era had for many of us, but probably more intensely for women, but we're spared graphic violence. While we hear a skin-crawling audio tape of Weinstein with one of the women, the actual assaults are kept offscreen. Much of the dramatic potency in the film derives from the stunned faces of Kazan and Mulligan as they interview the women; the horror that quietly registers in their eyes effectively takes the place of seeing what they're hearing.