Now in the multiplexes: 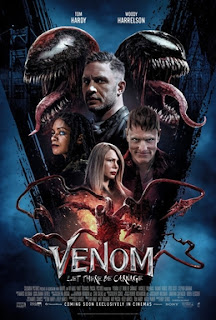 Venom: Let There Be Carnage--The King of the Rumbly Distorted Voice, Tom Hardy, is back in the dual role of Eddie Brock and Venom, the alien "symbiote" with whom he shares body-space. Eddie and Vennie have developed a bickering domestic relationship since the 2018 Marvel movie Venom; Vennie is constantly nagging his host to let him eat the brains of human "bad guys" like a kid begging a parent for permission to get a tattoo.

In this sequel, some of the Big V's genetic material gets blended with serial killer Cletus Kasady (Woody Harrelson), who bears Eddie a grudge. Cletus turns into an uber-Venom-ish monster called Carnage, who looks like he stepped out a Francis Bacon triptych. He busts out of prison and liberates his girlfriend Shriek (Naomie Harris), who can yell really loud, and the two of them go on a wild, vengeful rampage in San Francisco.

With his vague working-class Mid-Atlantic accent (he wears a Detroit Lions jacket even though he lives in the Bay area), Hardy's Eddie is a rather recessive leading man; mostly he's a serviceable straight man to Venom. But Harrelson puts on an entertaining show as usual, and Harris is freaky and memorable. Andy Serkis directed, working in a style of headlong visual shorthand that keeps the story flying forward like a driverless speedboat, and using the San Fran locations to good advantage.

But when I tell you what I liked best about Venom: Let There Be Carnage, it will make me sound just like the old guy that I am: It's an hour and 37 minutes long. That's right, this Marvel movie is a freaking hour and a half long. It doesn't have five endings; it doesn't keep you in your seat for more than two hours in fear that you won't feel like you got enough for your money. Make no mistake, there's plenty of weird, near-surreal action. The movie doesn't skimp, but it doesn't overload our plate, either.