In theaters this weekend: 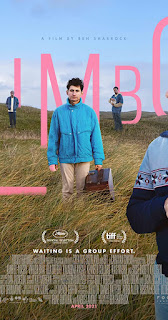 Limbo--The title refers to a beautiful, bleak Scottish island on which a handful of refugees, young men seeking asylum in the UK, are held until a decision is made on their cases. Their detainment isn't overtly cruel; they aren't tortured, except by boredom, homesickness, lack of purpose and the occasional casual bigotry of their neighbors.

They watch TV, squabble about the finer points of Friends, and wait for Godot in the form of the mailman in hopes of word on their status, or use of the phone booth to call home. They also sit, blank-faced, through near-surreal classes intended to introduce them to their new culture.

The focus is on Omar (Amir El-Masry), a handsome, deadpan young Syrian. The misery of Omar's situation is compounded by a physical factor: he's lugging around the family oud, a guitar-like musical instrument. He's reputed to be a master of the oud, and his doleful-eyed Afghan friend and self-appointed manager Fahrad (Vikash Bhai) would like to arrange a concert for the islanders. But Omar can't bring himself to play it in his new circumstance on the grounds that "It doesn't sound the same."

Written and directed by Ben Sharrock, this comedy-drama is quiet in tone, at times achieving an almost Beckett-esque atmosphere of comic suspension. But there's a humane hopefulness under the melancholia that keeps the movie from becoming downbeat.

It should also be said that some of the native islanders speak a Scottish dialect so nearly opaque to the American ear that the refugees, with their comparatively mild accents, would probably seem less alien to us. All those Friends reruns seem to have been good practice. 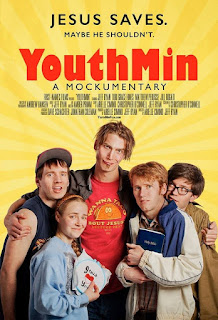 YouthMin: A Mockumentary--Pastor Dave, or "Pastor Deee," is a youth minister who, to put it mildly, tries too hard. Every year, he takes a small group of sullen teens to a Bible camp in Massachusetts.

The low turnout for his camp excursions may be due to Patror Deee being, well, intolerable. A bouncing-off-the-walls, energy-drink-guzzling maniac, he is also furiously competitive, determined to win every camp competition from tug-of-war to ice cream eating to "Bible Jeopardy." He's a trash-talker, too; the one Biblical teaching that he isn't sure of, he says, is that stuff about turning the other cheek.

Jeff Ryan, who plays Pastor Deee, also co-directed, with Arielle Cimino, this comedy in the Christopher Guest mode. Considering that it seems to have been made at least somewhat within a churchy context, it's surprisingly candid and self-deprecating about the moral issues people might have with this version of Christianity, and it's (blessedly) foul-mouthed and sexually frank. It's also full of sharply-observed details about the Bible camp experience--like "Pharaoh, Pharaoh" sung to the tune of "Louis, Louis"--that seem like spoofery but probably aren't, and anyone who has spent any time within that culture will find much in this movie recognizable.

The supporting cast is capable, playing characters ranging from an intelligent goth girl to a quiet loner to the pregnant (but unwed) and much more sensible youthmin that's been sent along to temper Pastor Deee's mania. Mostly these characters serve as appalled foils to the wound-up Pastor, who is sometimes too cringeworthy to be funny. As broadly played and wacky as YouthMin is, as a character study it borders, at times, on pathos.

Also on on Vimeo and YouTube, another charming low-budget oddity from New England: 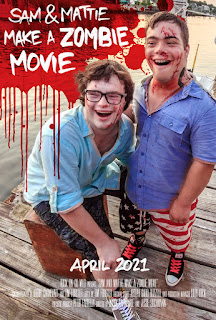 Sam & Mattie Make a Zombie Movie--Sam is Sam Suchmann and Mattie is Mattie Zufelt, inseparable teenage brothers from other mothers in Providence, Rhode Island. Both have Down syndrome--they met at Special Olympics--as well as an exuberant love for guy-oriented pop culture. This documentary, co-directed by Sam's older brother Jesse, chronicles how these guys got the Providence community, as well as some film-industry heavy hitters, to help them write and star in a twisted, extremely gory, free-associational and genuinely hilarious 45-minute horror flick called Spring Break Zombie Massacre.

The first half shows how, having committed to making the movie, Sam and Mattie's collaborators made sure that the finished product truly was the boys' work; we see the script conferences in which they craft the dialogue and defend their artistic choices, sometimes pretty contentiously. In the second half, we're shown Spring Break Zombie Massacre, with an occasional pause in the action so that Jesse can offer some behind-the-scenes explanation on Sam and Mattie's process.

The movie-within-the-movie, deftly directed by Robert Carnevale, is the story of how the Devil storms into the delivery room while our heroes are being simultaneously born, from different mothers but the same father (!). Deeply offended by being told to "grow up," the Devil kills both mothers, and shows up years later to stalk Our Heroes with his army of "zombies, demons and zombie demons" (these identities are assigned to his minions by a show of hands). He also urinates, first on the floor of the delivery room, and later in the punchbowl at the prom.

Without exaggeration, I can say that I have seen "professional" horror and action movies with dialogue and situations no less disjointed, and not nearly as pungent and witty. This movie has troubled passages, as older brother Jesse expresses doubts about the project--it's up to Peter Farrelly of There's Something About Mary, for instance, to advise Sam and Mattie that they should be sure to respect women--and its aftermath. But overall, this is a joyous, inspiring ode to the power of the movies to render life not as it is but as you think it should be.