Out this week on digital... 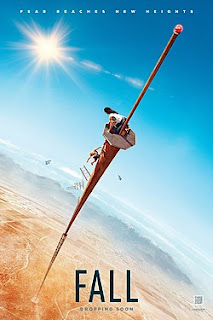 Fall--There's an old quote on the art of dramatic writing, attributed to everybody from George Abbott to George M. Cohan to Vladimir Nabokov to Stephen Spielberg: "Get your hero up a tree; throw stones at him; then get him down." The formula has rarely been followed with such dogged literalism as in this grueling but annoying thriller by the Brit Scott Mann, from a script he wrote with Jonathan Frank.

After suffering a horrible loss in a mountain climbing tragedy, Becky (Grace Caroline Currey) retreats into alcohol and isolation; her friend Hunter (Virginia Gardner) takes to performing daredevil risks and posting the videos online. A year after the disaster, in hopes of getting Becky out of her funk, Hunter talks her into joining her in climbing an insanely high old radio tower in the California desert. They don't take any food with them, because, of course, they'll be back down the rusty rickety ladder in time for lunch.

It need hardly be said that Becky and Hunter get stranded on the small platform at the top. They have no cell phone service; nobody is expecting them, and every effort they make to signal for help gets foiled. They're up there for days, getting hungrier and more desperate, and interpersonal secrets begin to emerge. Also, vultures start to strafe them, which I think is ornithologically libelous.

Heights are high on my regrettably long list of phobias, so this one was hardship duty for me. It's in that genre of "trapped in an inescapable situation" movies like 2010's Buried, or 2013's All is Lost, or Hitchcock's 1944 Lifeboat. But Fall strained both plausibility and patience for me. Really? No food? Not even a granola bar or a Slim Jim? I realize these are supposed to be reckless Gen-Z adrenalin junkies, but would they truly not tell anyone what they were doing or how long they planned to be gone?

Even if you accept this, though, the arrogance and emptiness of the project itself left me out of sympathy with our heroines. In 2018, I felt a similar exasperation with the (Oscar-winning) documentary Free Solo, about Alex Hannold's efforts to free-climb El Capitan in Yosemite. Of Hannold's almost superhuman physical prowess and mental discipline there could be no doubt, but the "because it is there" achievement seemed to me unworthy of the risk he was taking. I just kept thinking "who's going to tell his Mom?" Various of my friends and family members have looked at me with barely-concealed pitying scorn for this view and the puniness of my spirit it undoubtedly reveals.

Nonetheless, I felt doubly that way about the freakin' radio tower. Currey and Gardner are both lively and bright--too bright for how imbecilic the script makes them--so I couldn't help but hope that they would get down safe; my aggravation was with the movie itself and its contrivances. Watching it didn't feel like getting sucked into a thriller; it felt like being imposed upon, deliberately inconvenienced.