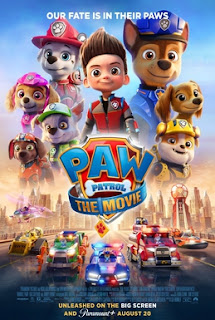 PAW Patrol: The Movie--Created by Keith Chapman of Bob the Builder fame, the Canadian TV cartoon PAW Patrol has been around for almost a decade. It's a boy-and-his-dog story, or rather, a boy-and-his-half-dozen-dogs story.  The boy, Ryder, leads a pack of six puppies, each of whom specializes in some branch of public safety, and who, like the Peanuts kids, never seem to age.

Chase, a German Shepherd, does police work; Marshall, a Dalmatian, fights fires. Zuma, a Lab, handles water rescues. Schnauzer Rocky runs a recycling truck and manages the team's environmental concerns, while Rubble the bulldog does construction. The only female member of the initial team, cockapoo Skye, flies the rescue helicopter. They dash around the town of Adventure Bay in souped-up, high-tech emergency vehicles, deploying gadgetry, and generally making themselves useful, and merchandisable.

In this inevitable movie version, the gang moves from bucolic Adventure Bay to the sprawling nearby metropolis of Adventure City, in anticipation of trouble now that their villainous nemesis Humdinger has managed to get himself elected Mayor. Humdinger is a vain, boastful, self-promoting buffoon who's more than willing to endanger the city if it helps his image.

Trouble, it need hardly be said, ensues. In the course of the story, which involves Humdinger's attempts to manipulate he weather so that it doesn't interfere with his public events, we learn that Chase was an abandoned pup in the streets, and he stills suffers PTSD symptoms when he's in the city. The team also gets an assist from a aspiring new member--another female--a dachshund named Liberty.

Look, I'm certainly not suggesting there's an earthly reason for you to go see this thing if you don't have a five-year-old fanatic who demands it. I saw it at a regular commercial showing, not a critics screening, and I'll admit I felt like a weirdo sitting there by myself on a Sunday evening. But if you do end up going, you might be surprised at how relatively painless it is to sit through. The animation is deft and speedy, and there are flickers of mild wit here and there throughout the dialogue, including a good-natured self-deprecating joke about how the team finances its palatial headquarters and equipment.

The cast includes the same sort of generic-sounding kid voices heard on the show as the puppies. But a few celebrities lend their pipes as well, including Jimmy Kimmel, Tyler Perry; even Kim Kardashian. Marsai Martin from the TV show Black-ish vigorously voices the dachshund Liberty.

It should be noted that in the ongoing war between cats and dogs, PAW Patrol: The Movie plants its flag firmly on the side of the dogs, not only because of the canine character of its heroes, but because the villainous Humdinger is attended by an entourage of noxious cats. It's a little surprising that the Feline Anti-Defamation League hasn't complained yet.