You've heard of Taco Tuesday, right? Well, Your Humble Narrator would like to propose Depressing Documentary Friday, devoted to docs on subjects so worthy that you feel guilty ignoring them, but so despair-inducing and enraging that they're impossible to enjoy, in the usual sense of the word. A couple of good ones are out this week; this first one is in theaters today: 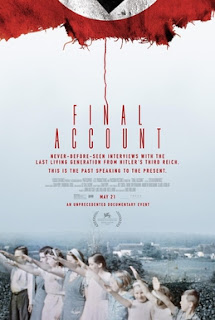 Final Account--The British filmmaker Luke Holland, whose maternal grandparents died in the Holocaust, passed on last July shortly after completing this movie. It's a collection of interviews with some of the last surviving members of the Nazi party; handsome, clear-eyed old Germans who discuss their involvement in, or awareness of, Hitler's regime and its murders. Just as you might expect, their attitudes vary. Some are evasive, some are candid, a few are repentant, at least one very decidedly is not.
Thus the film is in the family of Ophuls' The Sorrow and the Pity and Hotel Terminus, or Lanzmann's Shoah, among others, in which Nazis and/or collaborateurs are made to squirm under a documentarian's third degree. There can be a certain grim satisfaction in watching this, usually alongside an uneasy self-questioning about what any of us might do in a similar circumstance.
It's a powerful document overall, but one scene stands out: An elderly man named Hans Werk, who was in the Waffen-SS, talks to a group of contemporary German youth at a meeting at Wannsee (of the notorious 1942 conference where the Final Solution was planned). He speaks of his revulsion and regret at what he participated in, and the kids reject his urgent testimony, insisting that he's just trying to make people feel guilty about being German. These kids leave us with the terrifying sense that this film probably won't be the final final account.
Available on YouTube and other platforms: 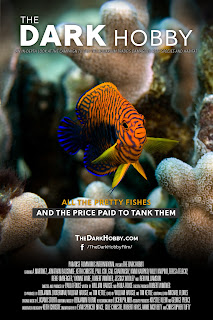 The Dark Hobby--The title refers to keeping aquarium fish. Directed by Paula Fouce, the film makes the case that collecting fish for the home aquarium industry is devastating both for the creatures themselves and for the reef environments from which they are taken.
Though it wanders as far as Cuba and the Philippines, the focus is on Hawaii, where fish collection has been legal and unchecked for decades, despite strict environmental regulation of almost everything else. Of several interview subjects, the most vivid is a genial, chuckling but unmistakably furious activist named Robert Wintner, aka "Snorkel Bob," who asserts that 99 percent of fish collected for aquaria die within the first year of their captivity.
I couldn't find any independent confirmation for that figure, but almost everyone seems to agree that the percentage is wretchedly high. As with last year's My Octopus Teacher, the movie also makes the case that marine animals are not mindless beings driven only by instinct, but that they are self-aware, capable of pain and pleasure and curiosity and friendship.
It all leads to a question it had never occurred to me to ask: In light of all this, why should anybody keep little fishies in glass tanks? I had an aquarium for a few years myself as a kid, and I shudder now to think of the (usually short) lives of its unfortunate inmates (which would have been even shorter and more unfortunate had it not been for my Mom, who of course usually cleaned the tank). Those of us who profess to love animals must admit, if we're honest, that our love is not always the best of luck for the animals.
Posted by M.V. MOORHEAD at 3:46 AM